One could say that swimming with sharks was just a filmy scene or imagination of the person. But in 20th-century we can also swim with sharks. 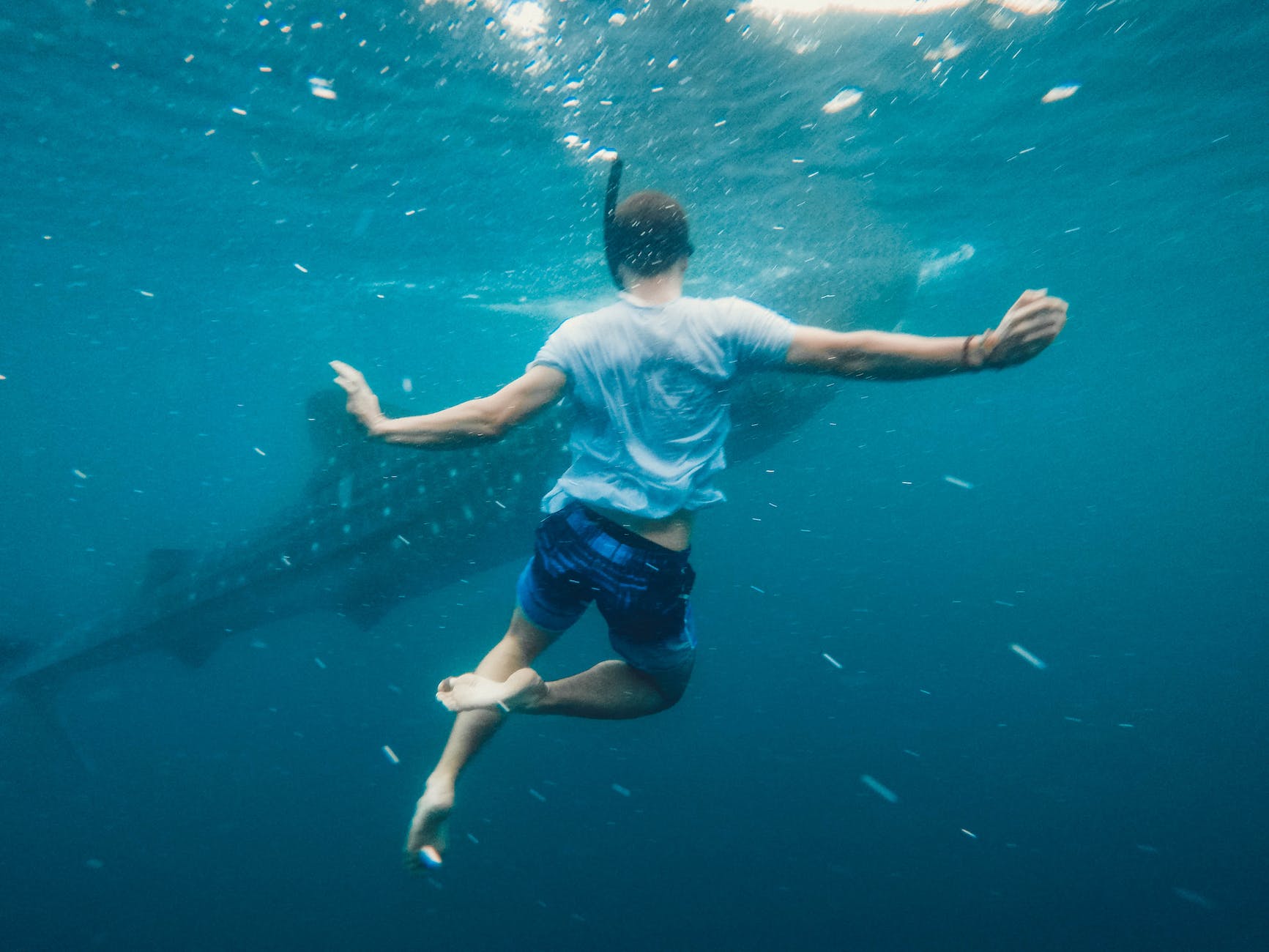 lt is not wrong to say that the sharks swim with humans. When a normal person thinks of swimming with a shark he will lose his temper. But today’s aquarium trainers have shown that swimming with sharks is an extraordinary experience in which the person has a close experience of the shark. With the shaking voice and shivering body and with the dullness of the brain when one sight of the shark he’s fear disappears in the air. Many of us love to swim with sharks but all we have known is the requirements that are necessary to swim with the sharks.

Swimming with sharks is one of the great experiences throughout a person’s life. It also has countless benefits seen in the human brain. As Jim kwik in Mindvalley has stated when we perceive new experiences our new brain cells (neurogenesis) are also formed in the hippocampus. Swimming with sharks is carried on specific shark tourism. Even it has been seen that many people do fraud and take money from the swimmer who has wished to swim with sharks. Be aware of all such frauds.

Intentionally it is a type of ecotourism to assist or to feel the tourists that the lively sharks are more valuable and even more attractive than the dead ones. Jacques coastal was first developed the shark cage. Shark cages are made for safety, underwater activities. But the scientists are also making continuous efforts to make the cage more protective. 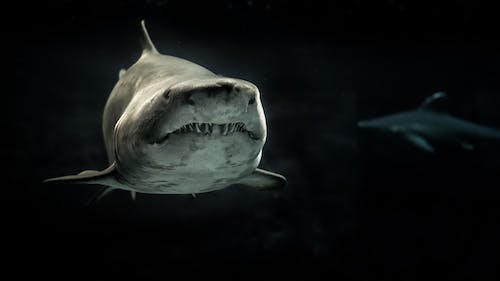 When we talk about the shark first of all what comes to our mind is its body. For the ease of swimming in the water, their body structure is highly streamlined, the structure that can reduce the friction whether the surrounding is water or air. Friction is a type of drag force that generally slows down the motion. Sharks’ skeleton are cartilaginous (other fish’s skeleton are generally made of bones when it comes to their structure). Cartilage is is a type of semi-rigid connective tissue that has both structural and functional importance and is less dense than bone.

Fins: Mostly sharks possess eight fins but the number of fins is variable in different species of sharks. A pair of pectoral fins enables the shark to swim and move forward in the water, as in the water a lot of energy is required to move through it. A pair of pelvic fins are also associated with the shark’s body. Pelvic fins uplift the shark throughout the water and they are present at the cloaca regions on the shark (the internal place where urinal, genital and intestinal cavity start).

A question arises what causes the fins to remain attached to the shark’s body. The scientists have found there are some rays (ceratotrichia) that hold fins to the surface.

Teeth: The shark possesses teeth made up of strong and hard material. In most cases, it has been seen that sharks have 3 rows of teeth. Sharks are born with the teeth in their mouth, which is being replaced from time to time. The replacement may occur after two weeks or more. The fact that their teeth are play role in their nutritional diet, intensely the shark with straight teeth prey on shellfish to crush them, pointed teeth sharks grind their enemy. Moreover, the pointed teeth with chiseled jaws prey on the large enemy in the ocean.

Angel sharks: It is considered to be the most endangered species by the International Union for Conservation of Nature. Its habitat is underwater sandy seabeds located with a depth of 150m. They are not considered dangerous because they remain mostly attached to the surface and even their bite is not as harmful.

Dogfish sharks: Their habitat is shallow water and in temperate water regions. They were included in the abrasive hunter species, have a sizable amount of intake which includes crab, fish, sea cucumber, and other invertebrates.

Typical sharks: (requiem sharks) these sharks have structural appearance noticeably differ. Such sharks possess tails with the lower limb is longer in size than the lower. Their upper limb helps them to catch their prey. Their limb that can be folded at their least angle relative to their body length use as a stunning weapon against their prey.

Different varieties of sharks have been found in a different environments. Specific and suitable environments are essential for the betterment or maintenance of their species.

White big sharks; To have sight or viewing such sharks the tourists have to be enclosed in a cage. This cage is made to protect the divers. Shark cage diving is also used for underneath experimental observation, may be helpful in cinematography, or suitable for the visitor’s activity. But recently shark-proof cages have also been prepared which has found to be successful to study or treat big white sharks which is more abrasive and even fatal to human survival.

Tiger, oceanic tip; or many more which are potentially less aggressive or dangerous but still has a chance of attack. Such types of sharks are mostly found in the pelagic zone(the etymology of this pelagic word is it is driven by the ancient word which means open sea) basically in an open sea the various changes occur within the temperature of the surroundings.

Basking shark; is less harmless as compared with other sharks but it is the second-largest shark still the whale shark is on the top. Having a greenish appearance where the caudal fins are crescent shape and a lateral keel within the tail

Why you should not swim with sharks

What type of fear pops up into your mind when you think of a large shark, obviously it is the most horrible view which a person experiences. Sharks are considered the most dangerous fish, so there will be the possibility that the cage is not protective or sometimes sharks become more scared that they even start biting the cage. At that instantly many of the divers lose their temperament and even it has been found that the divers turn into pale yellowish, increase heart rate and the dilation of pupil have been seen. For instance, in 2005 a British tourist in south Africa is attacked by the great white shark while he was in the cage and eventually his death happens. Sharks do not chew their food they directly swallow their prey into their mouth. 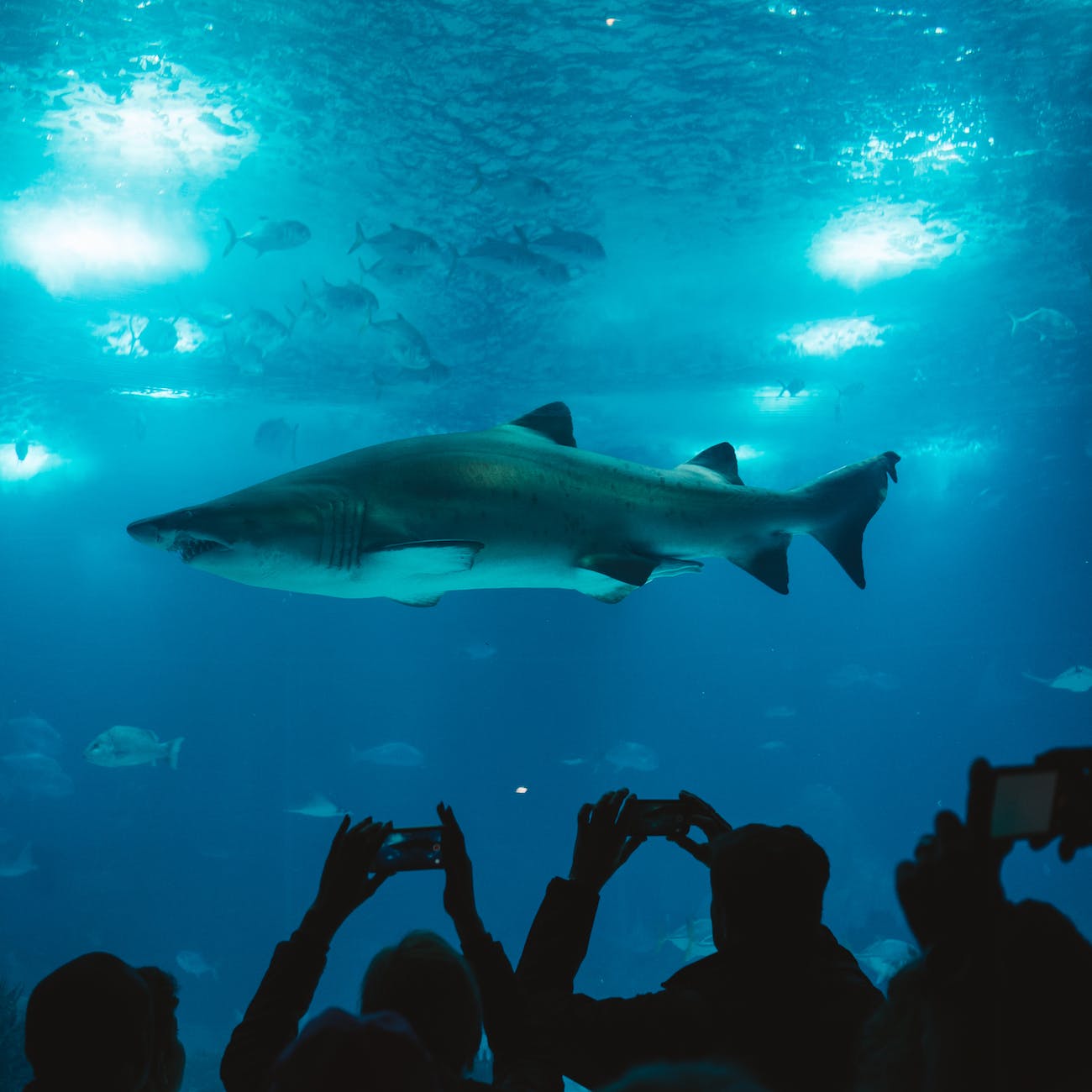 swimming with sharks1300×1300
Secondly, the risk of swimming with sharks leads to a lot of injuries. These injuries cause an excessive outflow of blood into the ocean, and that blood will make the shark more aggressive. And unfortunately, if you are attacked by a shark stop that bleeding as soon as possible. This will give the effect on sharks that the person next to him is more super powerful and the sharks themselves feel low potency. Sharks have a very high sense of smell. Sharks have olfactory systems stronger than humans, so they can immediately detect the smell of blood even a quarter-mile away.

The sharks are the most dangerous species on earth. In most cases, it has been seen that when a shark starts circling you, then you don’t panic yourself. Try to make eye contact with the shark, don’t act like dead because in front of you a shark is there not a bear. And slowly and steadily try to move backward.

Shark although sharks are considered to be the most vulnerable species on earth yet it has a positive adverse effect on the economy of that country. The most attractive and valuable shark towards the tourist is whale shark as well as for the ecotourism industry, the industry provides local jobs to the native people and has an earning of Us$12 million annually.

Tourist interest has been surprisingly increased in wildlife eco-tourism which will benefit the whole economy. All over the globe shark tourism has provided the economy with immense benefits. Many poverty stricken areas are also being benefited where shark tourism has been relocated. People pay a large amount of money to enjoy swimming with sharks.

Here we have given the answer to all of your queries related to swimming with sharks.

Is there any danger to swimming with sharks?

Ans: Yes, Swimming with sharks is a very dangerous activity. But all of a sudden if you are lucky enough to swim with sharks you must know all of the basic rules and safety precautions to avoid any attack. Moreover, treat the shark with respect. In most cases, sharks are not given an eye to the diver but in rarer cases, the sharks know the presence of a diver.

Where is the best place to dive with sharks?

What type of shark is the most dangerous one?

Ans: The most dangerous shark also called the ‘king of the sharks’ are white sharks which are large. It is estimated by the researchers that white shark has attacked 137 humans which are considered to be a large number of humans. These white sharks are a threat to human life.

What to do when a shark is circling you?

Ans: When a shark is circling you don’t put yourself in a panic condition, first of all, relax your body and mind, start to make eye contact with the shark just start to look into her eyes. Don’t even show that you are a dead person because that trick is only applicable when a bear is around you. But remember in front of you a huge shark is present. Start to cut off the angels, pray to god, and start to slowly push your body backward.

Do the sharks feel the love?

Ans: No, they do not. To be honest, sharks have brains but the feeling areas of the brain are not developed like humans. They don’t even smile at people. Even though several animals are also present which express their feelings such as happiness, anger. Dolphins and monkeys are the most expressive animals to show off their feelings.

So what has concluded all over observation is to swimming with sharks no doubt an interesting or extraordinary activity performed by swimmers. Although safety or precautionary measures should be adopted. Sharks are the most dangerous species but to treat her with respect in this way one could prevent themselves from any hazards. There are many countries which have well-arranged swimming with shark tourism. So visit only in the trustworthy places where no one can fraud with you and the result will be that you have to lose all your money.

Moreover, if you encounter any skin injury try to stop that bleeding as much as you can. The bleeding smell can be easily sensed by the shark which will make the shark more aggressive to attack. If a person cants unable to stop the bleeding he should avoid swimming with a shark.